A popular opinion is that bongs are a healthier way to smoke cannabis. But what does the science have to say about this claim? As it turns out, not much. Aside from a handful of inconclusive studies, there is a considerable lack of research. One finding, however, is that the healthiest way to smoke is to smoke higher quality cannabis, but less of it. This reduces exposure to tar. 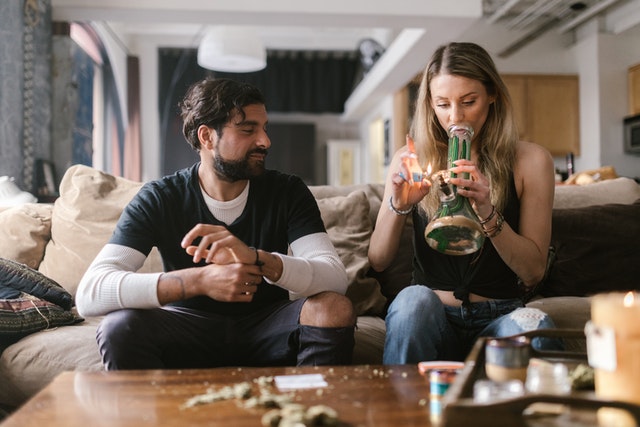 What happens in a bong? What is the science behind the water pipe? Do water and bubbles make inhaling healthier?

As often, it’s more complicated than it seems. Burning dried herbs produces a stream of smoke. That smoke contains the active ingredients of those herbs. In other words, everything you want. But it also includes lots of things you don’t want, like hot smoke, tar, and fine particles.

First, note that the term “tar” is a catch-all term. We use it to refer to the hundreds of unpleasant compounds produced by combustion. Aside from nicotine, cannabis is a lot like tobacco smoke. Both contain lots of polycyclic aromatic hydrocarbons (PAHs) that you don’t want to get in your lungs.

The bong, also called a “water pipe,” immediately cools the smoke. It does this by passing it through the water, allowing for smooth smoking. The water also filters out ash that would otherwise enter the mouth or respiratory tract. The water thus acts as a filter, hence its color, which turns brown.

But no one knows to what degree bongs subject cannabinoids to. We only know that water doesn’t do a good job of dissolving cannabinoids, so the loss is negligible.

What’s in the water can also change the nature of the smoke. Dirty water will produce a foul taste, with the risk of inhaling mold if the user doesn’t change the water often.

It is also not advisable to use alcohol instead of water. The inhalation of alcohol vapors is toxic. Cannabinoids and terpenes are also more likely to dissolve in alcohol than in water. This strips the smoke of its most desirable compounds.

Gas-liquid exchange occurs only between the surface of each bubble and the liquid. Presumably, increasing this surface area provides a greater degree of filtration. A diffuser that produces lots of tiny bubbles offers a high surface area to volume ratio. This allows for a greater exchange between gas and liquid.

Researchers have conducted very few studies on cannabis and bongs. But there was one notable study in California in the mid-1990s. Dale Gieringer, coordinator of NORML, wanted to test the effectiveness of inhalation methods. Together with the Multidisciplinary Association for Psychedelic Studies (MAPS). he found that the unfiltered joints were far more effective than a bong. A bong, the study reported, “produced 30% more tar per cannabinoid than the unfiltered joint.” The vaporizer surpassed all others, delivering far more cannabinoids per unit of tar.

One problem Gieringer noted was that the researchers had to use low-quality cannabis. Supplied by the National Institute on Drug Abuse, it only had THC levels of 2.3%.

“We were both surprised and disappointed at the same time,” recalled Gieringer. “But we learned that the vaporization seemed good, even with what was, at the time, a rudimentary device.”

University of Wisconsin pharmacologist Nicholas V. Cozzi also reviewed studies on bongs. Most were from the 1960s and 1970s. He found that the devices “may be effective in removing components of cannabis smoke.” He also noted that they may allow for “THC passing through almost intact.”

The conflicting results were puzzling and underscored the need for further study. Researchers have now focused their attention more on studies of vaporizers. Many consider Vaporizers to be a healthier tool for cannabis consumption.

In the meantime, Gieringer had some advice for healthy forms of consumption. “The easiest way to avoid harmful toxins might simply be to smoke stronger cannabis. But in smaller quantities.”