Carl Sagan is one of the most admired scientific celebrities of the 20th century and has written on a wide variety of topics beyond planetary science, including the need for truth in public discourse, world peace, and climate change, which resonates today. But many don’t know that Sagan was also a passionate cannabis advocate and has written extensively on the subject, albeit pseudonymously. 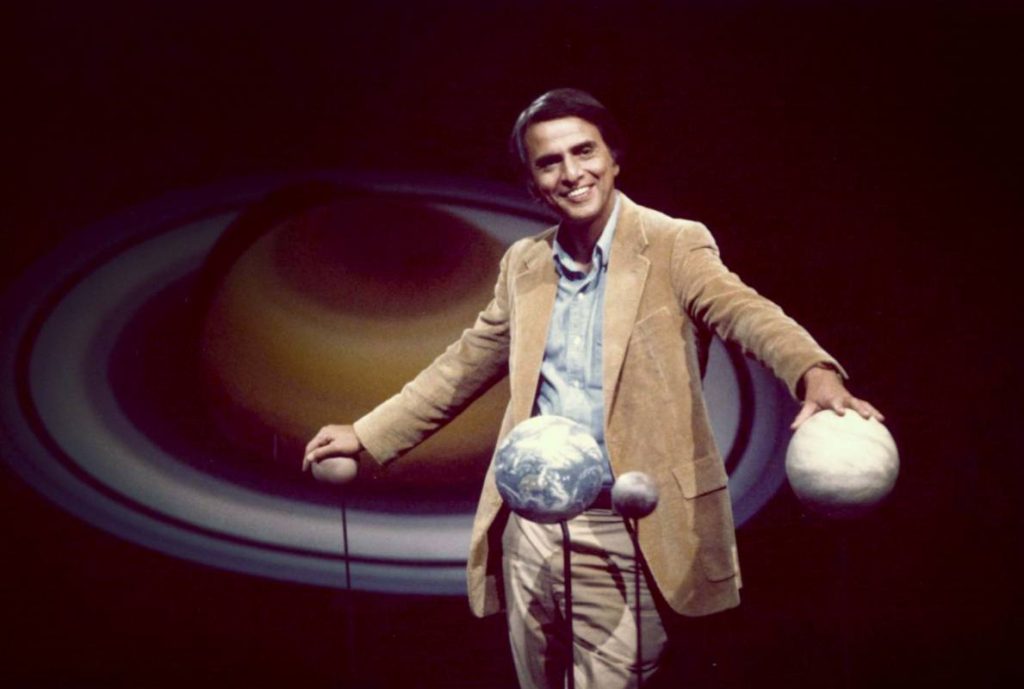 Carl Sagan is one of the best-known and most admired scientific celebrities of the 20th century. As a planetary scientist, he provided visionary insights into the atmospheres of Mars, Venus, and Europa, the moon of Jupiter. As host of the documentary series Cosmos, he took millions of viewers on a guided tour of the universe. Sagan has written on a wide variety of topics, including the need for truth in public discourse, world peace, and climate change, which resonate today.

But many don’t know that Sagan was also a passionate cannabis advocate and has written extensively on the subject, albeit pseudonymously.

As a cannabis advocate, Sagan was decades ahead of his time. Yet he wisely kept his pro-cannabis positions to himself as the “war on drugs” reigned. In small groups, however, he professed his love of the plant with passionate eloquence. He even went so far as to write an anonymous essay (under the pseudonym “Mr. X”) for his friend Lester Grinspoon’s 1971 book Marihuana Reconsidered.

Much of Sagan’s cannabis correspondence has only come to light recently. And it reveals long-hidden facets of his complex life – a life in which cannabinoids helped him reconnect with childhood memories, find mathematical insights, broaden his appreciation of art and music, and deepen his love for his wife, Ann.

Sagan’s first experience with cannabis proved a bit disappointing. Around 1959, his anonymous essay recounts, he had reached a “period of relaxation in life” after years of intensive scientific work. During this period, he befriended a group of people who smoked cannabis “irregularly, but with obvious pleasure.” For months, Sagan politely refused every joint he could get his hands on until, one night, he finally decided to experiment.

After about half an hour, Sagan felt “no effect”. However, the “euphoric” seshes from his friends convinced Sagan to keep trying – and on his sixth or seventh attempt, the chemistry happened:

“I was lying on my back in a friend’s living room, idly examining the pattern of shadows cast on the ceiling by a potted plant… I suddenly realized that I was studying a miniature Volkswagen with intricate details distinctly outlined by the shadows… When I closed my eyes, I was stunned to find a movie playing inside my eyelids… a simple country scene with a red farmhouse, blue sky, white clouds, a yellow road winding over green hills to the horizon… hues of exquisite depth, and surprisingly harmonious in their juxtaposition. “

Although he clearly understood that he was hallucinating, Sagan was still “convinced that there are authentic and valid levels of perception with cannabis.” As a result, he quickly became a regular – albeit relatively light – smoker and would remain so for the rest of his life.

While his public persona continued to write popular science books and host television specials, Sagan pursued his research in complete secrecy, diligently documenting the extraordinary mental phenomena he experienced while under the influence of cannabis.

Sagan’s travelogues sometimes feel more like software manuals than spiritual texts, but that’s a big part of their unique appeal. Above all, Sagan was a clear and precise scientific communicator, and that’s the perspective he brought to his travels in cannabis. What other human beings, for example, would describe the visions he had with his eyes closed in these terms?

And then there was the time he took a shower while high and ended up drawing statistical diagrams out of soap on the wall tile – and then translating those ideas into college essays:

“I had an idea about the origins and disabilities of racism in terms of Gaussian distribution curves… I drew the curves in soap on the shower wall, and went to write the idea down. One idea led to another, and at the end of about an hour of extremely hard work, I discovered that I had written eleven short essays on a wide range of human social, political, philosophical, and biological topics.”

Of course, cannabis wasn’t solely responsible for these productions. But, according to Sagan, the plant helped streamline the mental cross-pollination between the various scientific and mathematical disciplines he had studied at the university level.

Sagan was particularly eager to disprove the “widespread myth about this type of high: the consumer has the illusion of great insight, but it does not survive the morning’s examination.” He was “convinced that this is a mistake” and that the…hunches you get when you are high are real.

The main problem, he said, was “putting these ideas into a form acceptable to the quite different self that we are when we are down the next day.” He solved this problem by recording his highdeas in great detail, then analyzing and refining the good ones in the days that followed.

Sagan’s prodigious memory, curiosity, and rationality provided the raw materials, while cannabis bound and molded them into meaningful achievements.

As challenging as Sagan’s scientific peaks may be, some of his most moving travel reports are not about rational calculations but emotional and aesthetic experiences: discovering music, exploring art, reliving childhood memories, and connecting more deeply with his wife through the magic of cannabis.

For much of his life, Sagan has been – by his admission – relatively ignorant about music. But with the help of cannabis, he wrote, “For the first time, I was able to hear the different parts of a three-part harmony and the richness of counterpoint.”

Similarly, he writes, “the cannabis experience greatly enhanced my appreciation of art, a subject I had never much appreciated before.” He discovered a new ability to translate real-world scenes into colorful abstract paintings in his mind – an ability he had never imagined, let alone tried to develop before cannabis awakened him.

His views on cannabis are similar to Aldous Huxley’s views on psychedelics. Both men believed that mind-altering drugs could change our perception from our usual survival-oriented mode to one that allows for unique sensory perception and reflective thought patterns that society and our psychology are structured to keep at bay. Huxley wrote an entire book, The Doors of Perception, about this phenomenon which he called “Mind at Large”.

Sagan also discovered that through cannabis, he could “reach into the past, recall childhood memories, friends, relatives, toys, streets, smells, sounds and tastes of a bygone era.” In addition, he found that he was able to “reconstruct actual childhood events that were only half understood at the time.” In other words, cannabis allowed him to relive his childhood memories in great detail from the perspective of the adult he was, giving him new insight into half-forgotten episodes in his life.

Perhaps most profoundly, Carl Sagan found that cannabis increased his empathy for the people around him, especially his wife Ann, a consumer and legalization advocate, with whom he spent many happy hours “sharing discussions, perceptions, and humor.” In the bedroom, they discovered that cannabis gave sex “an exquisite sensitivity” and strengthened their physical bond. In those moments, Sagan writes, cannabis allowed him to “give his full attention to every sensation” and stay focused on the present.

For all these reasons, Sagan felt that the “serenity and insight, sensitivity and companionship” fostered by cannabis were “desperately needed in this increasingly crazy and dangerous world.