The fight against outdated Indonesian medical cannabis laws is being led by a mother as she struggles to get much-needed cannabis for her sick son. And while a previous application to the country’s constitutional court in 2020 was rejected, the government has promised to review its current position. For now, cannabis remains a Class 1 narcotic, along with heroin, cocaine, and 65 other types. 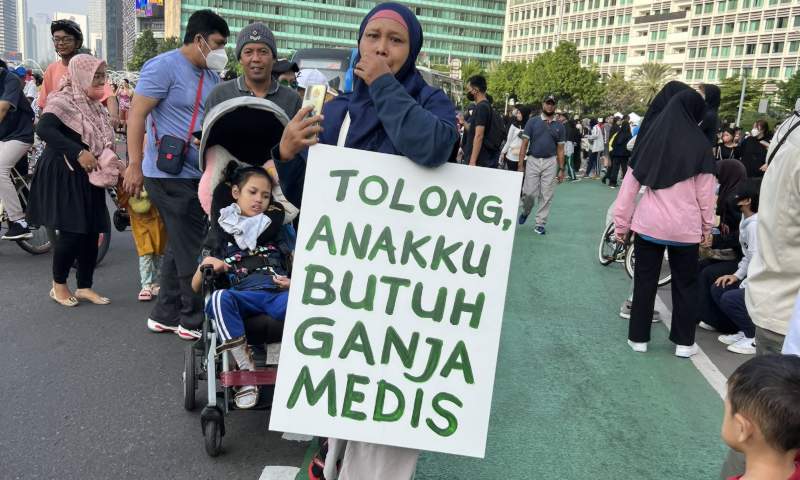 Indonesian medical cannabis reform has resurfaced after a mother named Santi openly requested medical cannabis legalization as she fights for her son Pika. He has Japanese encephalitis, a viral disease transmitted by mosquito bites.

Santi Warastuti and two other women had previously submitted a court petition to review Indonesia’s Narcotics Law to the country’s Constitutional Court in November 2020. However, the court did not grant it.

“This medical cannabis is urgent for me because Pika, my child, is still not free from his seizures,” Santi said on the sidelines of a protest last week. A picture with a “Help my son get medical cannabis” sign has gone viral on Indonesian social media.

Pika would need CBD oil, which is still illegal in Indonesia. Cannabis for medical use conflicts with Law No. 35/2009 on narcotics.

Article 8, paragraph 1 of this law clearly explains that the use of class I narcotics in Indonesia, including cannabis, is prohibited, even in health care.

Research on Class I drugs can also only be carried out after obtaining the Minister’s approval on the recommendation of the head of the Indonesian Food and Drugs Control Agency. In these regulations, cannabis is included as a class I narcotic along with heroin, cocaine, opium, cocaine leaf, cathinone, ecstasy, and 65 other types.

Government policy is based on the United Nations decision to include cannabis in Schedule IV of the Single Convention on Narcotic Drugs of 1961.

However, changes took place in December 2020. The United Nations Commission on Narcotic Drugs (CND) removed cannabis from this list, which could start a change in Indonesia.

The Indonesian Government Launches a Review of the Law

The discussions around legalizing medical cannabis in Indonesia returned to the carpet at the end of May. A commission has questioned the government’s attitude towards narcotics for medical purposes.

Asrul Sani, a member of Commission III of the Indonesian House of Representatives, admitted to receiving many suggestions from the public regarding the use of cannabis for medical purposes.

“We cannot deny that, to some extent, cannabis can be part of medicine. But, to what extent is the government going to open the space for this?” asked Asrul.

In 2017, Fidelis Arie Sudewarto, a civil servant, was arrested for planting 39 cannabis plants by the National Narcotics Agency (BNN).

The cannabis was grown to treat his wife, Yeni Riawati, diagnosed with syringomyelia, the growth of cysts in the spinal cord. His wife eventually died 32 days after the BNN arrested Fidelis.

Responding to this statement, the Deputy Minister of Law and Human Rights, Eddy OS Hiariej, said that the purpose of the Narcotics Act was not only to eradicate drug trafficking but also to guarantee the availability of narcotics for research and health.

“That means there is a health aspect here, so it is possible that, for example, cannabis for medical use could be used.”

Government to Look at Harms and Benefits of Current Laws

In an interview, Deputy Chairman of Committee III of the Indonesian House of Representatives, Desmond Junaidi Mahesa, said on June 28 that he would consider the proposed revision of the Narcotics Law No. 35/2009 to eventually legalize medical cannabis.

“We will first look at the value of benefits and harms. From the studies I know of, it turns out that the value of the health and economic benefits is extraordinary, and the harms are very low,” Desmond said.