The French State is in the process of authorizing the exploitation of hemp flowers on its soil. Anticipation is building amongst growers and producers, and there is a sense of optimistic enthusiasm in the air, for the most part. However, some smaller hemp growers denounce the regulations, claiming that they will only benefit larger industrialists with the capacity to meet the demands. 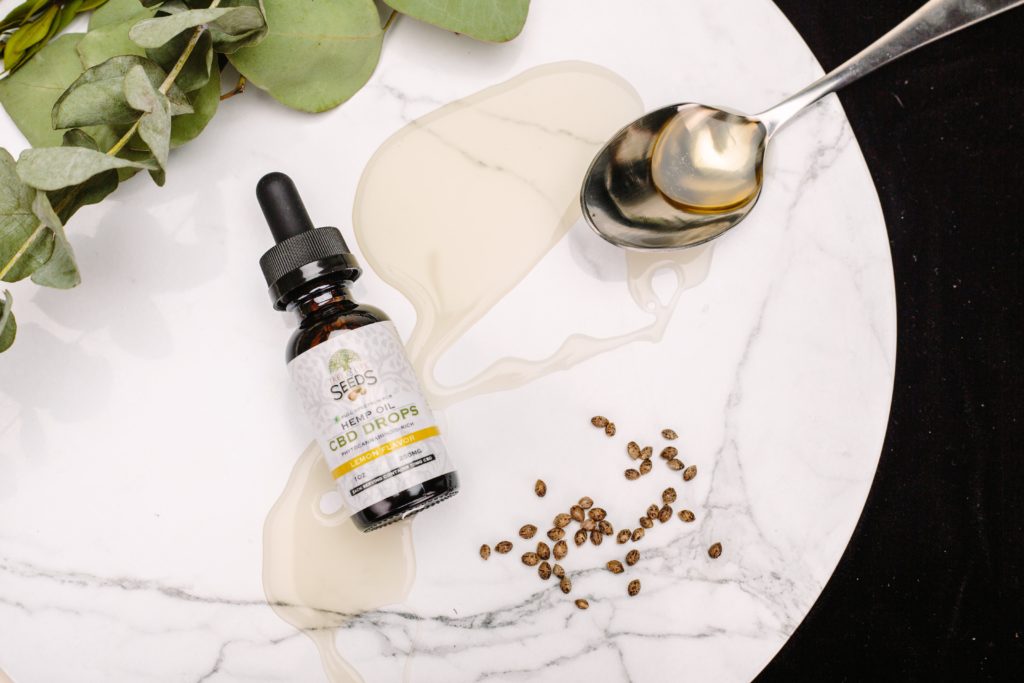 The farm is surrounded by fences. Soon, dogs will be on guard at night. Under 5000 m2 of greenhouses, hundreds of plants unfold their green and crenellated leaves. Once cut, they will hang under the tarpaulins plunged in the dark, swept by a fan to dry them. From this upside-down jungle comes the pungent smell of cannabis.

Keep up to date with all the latest news about hemp flowers, CBD, and other weed-related business using our free cannabis news app.

La Chanvriere De TY Coat, a farm in the Côtes-d’Armor region, began growing hemp flowers in March, driven by a surge in consumption of CBD, the molecule produced by the flower. Studies and promoters claim that it has soothing and anti-inflammatory properties. “We are duly registered with the prefecture,” says Charles Lunn, who initiated the project and is co-manager of the Cataleya company, which owns the GreenBee brand. They are navigating in a grey area, as the harvesting of hemp flower is not yet legal in France, even if it is marketed there.

To make a good impression, these entrepreneurs have planted authorized varieties with low levels of THC, a psychotropic molecule. The maximum THC concentration in the hemp flowers is just 0.2%, whereas it can exceed 15% in hashish, the cannabis resin. The plants are supplied by the French cooperative Hemp-it, which supplies the industry interested in the stem and seeds. At the expense of the flowering tops, which do not need to be developed.

“We end up with a lot of work, removing the male hemp flowers to keep only the females, where the CBD is found. French regulations don’t allow us to have genetics that is more appropriate to our needs, but we’re going to stay within the limits,” resigns Tristan Cloarec, the founder of Cataleya. “We are not competitive with other countries that have created a flower industry,” adds his partner. “What we are doing here is militancy and demonstration: telling the state that we exist and that we know how to do it.

A Boom in CBD Shops

In the GreenBee shop in Morlaix, the shelves for growing exotic plants will soon give way to hemp-based food and cosmetic products. Oils, protein-rich seeds – “a substitute for meat” -, chocolate bars or CBD sweets… They will soon open a sixth outlet in Brest. “I’ve been approached by parapharmacies, and I’ve had requests from the United Arab Emirates and Iraq,” adds the owner, who is looking for staff.

In France, CBD shops are blossoming like hemp flowers. In November, the European Court of Justice overturned France’s ban on the sale of natural CBD in the name of free trade. This is on the condition that it is legally manufactured in the European country of origin and that it does not constitute a danger to public health – which no study has shown. On 15 and 23 June, the Cour de Cassation, France’s highest court, ruled in favor of two CBD shops, not considering this molecule to be a narcotic.

The Weight of Imports

At the beginning of the year, the Syndicat Professionnel du Chanvre (SPC), formed in 2018, counted more than 400 CBD shops in France. In August, it estimated their number at just over 1,000. “But this is changing very quickly. Shops are opening almost every day,” says Aurélien Delecroix, president of the SPC. In addition, there are tobacconists (“about 8,000 outlets”), pharmacies, organic shops, and supermarkets, all showing interest in selling hemp flowers and other CBD products.

On 18 June, Monoprix deployed CBD-based products from the French company Rainbow in 250 of its shops, including the dietary supplements of its Kaya brand, positioned against stress and lack of sleep. The Chilled drink can also be found at Carrefour.

“But today, 90% of finished CBD products are imported,” says Aurélien Delecroix. From Italy, Switzerland, Belgium, Luxembourg… France is the leading producer of hemp flowers and CBD in Europe, but it is used for construction and textiles.

The CBD trade is promising. As the Industrial Union for Hemp Extracts (UIVEC) points out, the French market for finished CBD-based products (not including the marketing of raw hemp flowers) is estimated to be worth nearly 700 million euros by 2022, if regulations are favorable. According to the National Union of Food Supplements (Synadiet), the market for CBD-based food supplements alone is estimated to be worth more than €100 million in the first year.

“Among the hemp growers that we represent (1,500 farms), half of them want to position themselves in hemp flowers and CBD,” says Ludovic Rachou, president of UIVEC. “France is fortunate to have a large number of extractors and established industries capable of processing and producing everything from raw hemp flowers to highly-processed CBD-based products. We have the potential to become the reference market for hemp extracts in Europe and even worldwide. For the moment, the 20,000 hectares in France do not exploit the hemp flower.

The problem is that hemp flowers also contain the stupefying THC molecule, which is difficult not to extract with CBD. The decree of 22 August 1990, therefore, prohibits the harvesting of this flower.

But prompted by the opinions of the European Court and the Court of Cassation, the State is reviewing its position: on 20 July, it submitted a revision of its decree to the European Commission, which should authorize the cultivation of all parts of the hemp plant. On the other hand, it is forbidden to sell the raw flower and leaf to consumers “in any form, alone or mixed with other ingredients, in particular as smoking products, herbal teas or potpourri.” The three stated objectives are: “to protect consumers”, “to maintain the capacity of the internal security forces to combat drug trafficking” and “to allow the development of new industries in France”. But some of the industries denounced the order as “distorted from the start.”

“We were not represented around the table. The decree was rewritten with InterChanvre, which represents the interests of industrial hemp growers, as the only professional player,” points out Jouany Chatoux, a cannabiculturist in the Creuse region of France and spokesperson for the AFPC (French Association of Cannabinoid Producers). InterChanvre’s strength lies in the fact that it presents itself as the spokesperson for 1,500 producers and all French hemp and hemp flower manufacturers. This compares with 150 producers for the AFPC at the time of the discussions with the ministries.

However, the smaller producers are getting involved. “About 600 French farmers have started growing hemp with active ingredients this year,” says Aurélien Delecroix. “It’s an alternative for former tobacco producers and for the perfume and medicinal herbs industry, which are looking for new outlets and are already equipped. At their peril. “For the moment, there is case law in our favor, but we are not totally protected, we risk being sued,” says a cannabiculturist.

InterChanvre urges caution: “You have to be careful of the fashion effect and not produce more than the market needs,” says its director Nathalie Fichaux. Not to mention the validity of the product delivered: “The grower must guarantee, as he does today, that he is working on the right variety, with the geolocation of each plot and a controlled THC level. Otherwise, there will be abuses. Our business is hemp, not cannabis,” she says. For its part, the SPC says it is ready to trace products using blockchain technology and to have farms monitored by independent certifiers, as is the case with organic farming.

However, small-scale growers are asking for more in terms of THC content. Because it is difficult, they say, to respect the 0.2% limit. “Even with adapted seeds, THC residues will concentrate in certain places on the flower,” explains one of them. The second argument is that controls are not reliable enough on such small quantities, says a parliamentary report on welfare hemp, published in February. The deputies, represented by the elected representative of La République En Marche Jean-Baptiste Moreau, call for a THC threshold between 0.6 and 1%. By way of comparison, Switzerland has allowed a THC content of 1% in the plant since 2011, and since 2016 in products containing CBD.

This leads to the third argument: not to suffer from unfair competition with Switzerland or Italy, which allow 0.6% THC in the plant. This would be a step too far for InterChanvre: “A level of 0.6% to 1% THC would mean moving towards the legalization of cannabis,” says its director, Nathalie Fichaux. “We are asking for at least experiments in Reunion with 1% THC to see the possible negative impacts on the human body,” agrees Ludovic Mendes, LREM MP and one of the authors of the parliamentary report.

Cannabis growers are turning the health attack on its head by saying they want to replace black market cannabis, where THC levels are much higher, insists Aurélien Delecroix of the SPC – who is also a reservist police officer. However, smoking hemp flowers is not recommended for your health.

In fact, it’s a lack of political will,” says Ludovic Mendes. The Ministry of the Interior does not want to control people in the street, even if we have the means to trace cannabis production. “What I understand is that the state lacks the means to secure production,” says an actor present at the negotiations. “It’s a question of budgetary arbitrage”, commented another. “There are solutions for differentiating flowers, but does the state want to invest in tests that the police would use? It is easier for them to ban the sale of raw flowers.

For the SPC, the state would gain by taking advantage of a market for smoking hemp flowers that it estimates at 1 billion euros in one or two years, extrapolating the Swiss situation. The union said that numerous appeals against the new decree were already being prepared and that it was determined not to be fooled.

First published in business.lesechos, a third-party contributor translated and adapted the article from the original. In case of discrepancy, the original will prevail.