The industrial cultivation of hemp offers significant ecological alternatives in addition to significant economic benefits. Its ecological benefits include improvements in soil quality and support for biodiversity. It also has lower water requirements than most other crops. However, despite these benefits and its many industrial uses, the plant still exists in something of a legal gray area. 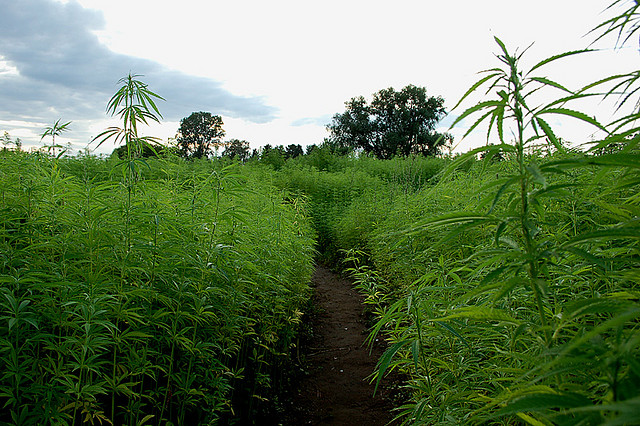 At the end of the year, during the COP26 in Glasgow, the heads of state and delegates of the countries represented could well walk in the heart of a huge field of hemp. A virtual field, offering a technological immersion experience intended to make an impression. This exhibition project is led by the British Hemp Alliance, a British lobby group for the development of the cultivation and protection of the planet.

The plant, which has been used for centuries for recreational or therapeutic purposes, but also for industrial purposes (weaving, rope, dressing, construction, paper, food, etc.) has many ecological virtues. Various studies conclude that hemp has carbon dioxide sequestration properties which make it a complement solution for trees: the plants indeed capture and retain 9 to 13 tonnes of carbon per hectare of plantation. Their much smaller growth, but faster than that of trees, makes them a potential alternative solution.

To keep up to date with all the latest events and developments in hemp, cannabis, and CBD, download our free Hemp.im cannabis news app.

A Consensus on Hemp to Be Established

Scientific consensus remains to be established. According to experts at Climate Explained, “Hemp is an herb and cannot compete with the sequestering capacity of trees. But it can be used in a crop or in concrete, with both potentially positive effects. carbon sequestration. “

“Hemp is the perfect crop for carbon sequestration, assures Victoria Troyano, advocacy officer at the European Industrial Hemp Association (EIHA).” It grows rapidly, in just four or five months, reaches up to 5 meters, and roots deeply up to three meters. “

Hemp supporters arrived at this potential minimum of 9 tonnes per hectare based on a very precise calculation. One ton of harvested hemp stalks contains 0.7 tons of cellulose (45% carbon), 0.22 tons of hemicellulose (48% carbon), and 0.06 tons of lignin (40% carbon). Therefore, each ton of industrial hemp stalks contains 0.445 tons of carbon absorbed from the atmosphere. The conversion of carbon into CO₂ (12 tonnes of carbon equivalent to 44 tonnes of CO₂) represents 1.6 tonnes of CO₂ absorption per tonne of hemp. Based on land use, using an average yield of 5.5 to 8 tonnes per hectare, this, therefore, represents 9 to 13 tonnes of CO₂ absorption per harvested hectare.

The benefits are numerous, both for the quality of the soil and for the diversity of possible industrial uses (construction, textiles, packaging, food, dermatological products, paper). The water needs are low. Herbicides and pesticides are unnecessary.

The British Hemp Alliance and the EIHA, which is based in Brussels, are trying to get the legal bans on the cultivation of this plant lifted. They argue in particular that the level of THC (Tetrahydrocannabinol) in hemp is too low to have psychoactive power.

“The hemp plant has been wrongly considered as a cannabis flower (marijuana), that is to say as a narcotic substance in the United Nations Single Convention”, continues Victoria Troyano. “Over the years this has caused a lot of confusion, as the cultivation of cannabis plants for industrial purposes is clearly excluded from the scope of international control. Industrial hemp has been severely restricted by onerous licensing procedures and European regulations. and complex nationalities. “

Last October, three years after the adoption of the Farm Bill in the United States, which defined “industrial hemp” as a plant having no more than 0.3% THC by dry weight, the European Parliament, in turn, raised the minimum level of THC allowed in the cultivation of hemp, from 0.2 to 0.3%, which was seen as a first step in the right direction by the EIHA.

“The current problem with hemp cultivation is the gray area in which hemp-derived products are marketed, says Victoria Troyano. There is no harmonization at the Member State level, which hinders the prosperity of the sector. The priority is to ensure the adoption of a fair and clear legal framework at the EU level. ” Thanks to greater regulatory flexibility, the number of hemp growers in Ireland increased from 4 in 2015 to 94 last year.

(Featured image by kat_geb (CC BY 2.0) via Wikimedia Commons)

First published in L’Echo, a third-party contributor translated and adapted the article from the original. In case of discrepancy, the original will prevail.