We wrote many times about the huge potential of cannabis (health properties, opportunities for farmers, positive effects on climate, industrial applications, construction, food, reclamation…). This time we will describe how cannabis can help bees, whose populations are declining for many years. The main risks include viruses, pesticides, habitat loss and climate change. 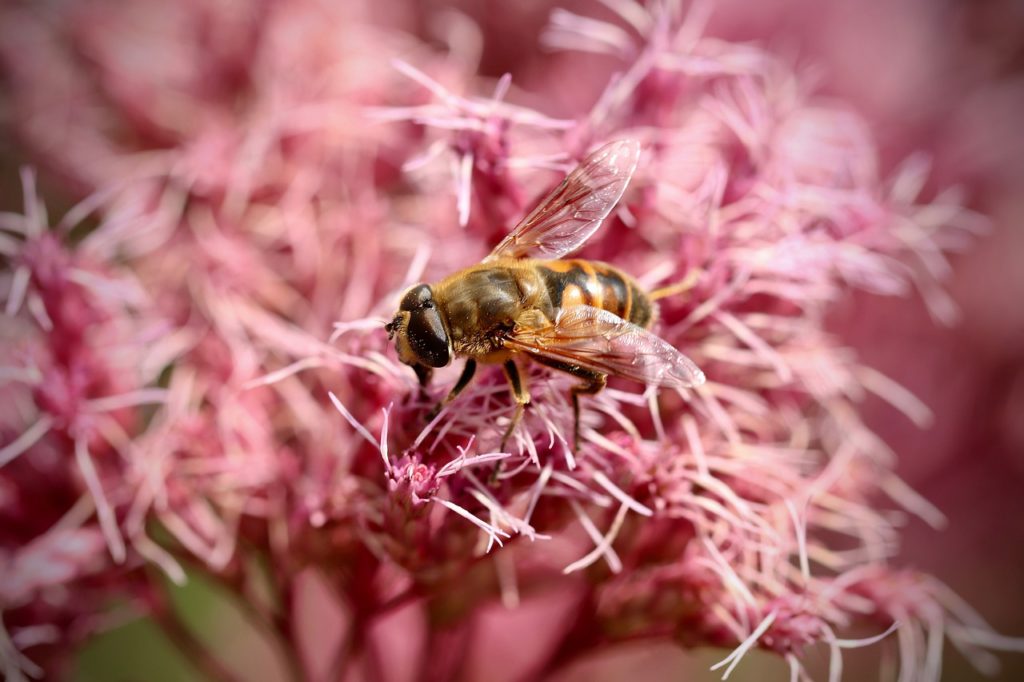 Few people know that without bees, most plants and animals will die out. Will cannabis help save them? The most common type of pollination (propagation of seed plants) is insect pollination. Only 20% of plants do not need insects to reproduce.

Sowing hemp is sexually distinct and wind-pollinated. Its flowers do not produce nectar. The only work on the potential use of cannabis as a bee benefit published by Dr. Jasvir Singh Dalio from India. In summary, he concluded that cannabis seeds are an important source of pollen for pollinators in months when there is no other use.

However, the study refers only to the beneficial conditions in India. Cannabis covers very fine secretory hairs that are most likely to repel herbivores and insects (Anonymous 2016). The secretion, consisting of oils and mucus, contains both THC and CBD. There is a hypothesis, not scientifically proven, that bees collect it like a resin to produce propolis.

So let us assume that honey obtained in France has a real psychoactive effect on people. What about bees? Does THC affect their behavior? In 2001, a team of scientists led by John McPartland published a scientific paper that presented research into the presence of cannabinoid receptors in insects, including bees. These receptors are present in almost all animal species found on Earth. Even in the simplest organisms such as hydra, and, it is thanks to them that humans feel the effects of cannabinoids.

A world without bees

Therefore, without bees, many plants will die, and so will animals. Everyday life can become not only grey and monotonous but also difficult to bear. Here are some of the results of the extinction of pollinators:

In March this year, a study published in the journal Biomass and Bioenergy suggested that cannabis could help maintain bee diversity and prevent bee extinction. According to beekeepers in the United States, their colonies decreased by 40% in the last year alone!

According to scientists from the University of Colorado: Hemp is wind-polluted and bipolar and therefore produces a large amount of pollen. Hemp blooms in northern Colorado between the end of July and the end of September. This period coincides with the absence of pollinator-friendly crops in the region, which makes cannabis flowers a potentially valuable source of pollen for bees.

According to the US Environmental Protection Agency (EPA), the number of bee colonies in the United States is decreasing due to stress such as pests. Moreover, exposure to pesticides and poor nutrition due to lack of pollen.

The authors of the study note that as cannabis crops become more widespread, the amount of pests increases. They, therefore, call for a plan to protect pollinators such as bees and combat pests that could damage crops.

It’s not just the bees. Birds, bats, butterflies, and hummingbirds, like bees, are pollinators. They are essential for the life cycle of crops and other flowering plants.

The Obama administration set up a task force on pollinator health in 2014 with the aim, among other things, of reversing the decline in bee populations.

First published in konopie, a third-party contributor translated and adapted the article from the original. In case of discrepancy, the original will prevail.